A Brief and In-Depth Look

While the IMCC brand was officially formed in 2002, the company has a rich history dating back over four decades to 1972, which resulted from a combination of company formations, mergers and acquisitions involving Deutsche Babcock Services, NOELL IMAC, ADCE, GPC, GSME, CIC and TGPC.

In 2018, following a management restructure, a new entity was formed under the name IMCC Investment L.L.C., thus retaining the IMCC brand identity. 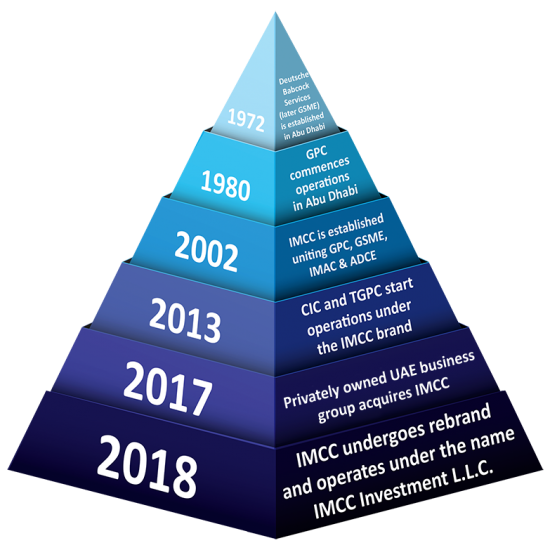 Below we take a closer look at the various companies’ formations that took place in Abu Dhabi over the past four decades which today make up IMCC Investment L.L.C.

In 1972 Deutsche Babcock Services (DBS) opened a division in Abu Dhabi supplying equipment and maintenance support for the oil and gas industry. Following this, Abu Dhabi Coating Enterprise (ADCE) was established in 1976 as a supplier of painting, coating and scaffolding services followed by the formation of NOELL IMAC in 1980 as a heavy steel structure manufacturer. 1980 also saw the establishment of Gulf Piping Company (GPC) as a fabricator manufacturing semi-submersible and jack-up drilling rigs, offshore platforms, jackets, topsides, process and pipe rack modules, FPSO turrets and buoys as well as other large structures.

The 2000’s saw a number of mergers and acquisitions including that of NOELL IMAC who acquired GPC and ADCE in 1995. In 2002, DBS, ADCE, GPC & IMAC united together under one brand – the IMCC Group, which was established specifically for the merger of this diverse group of companies. Shortly after, in 2003, DBS was renamed to GSME following an agreement between DBS’s mother company in Germany and IMCC.

In 2017 a privately owned UAE business group acquired IMCC and its group of companies, and in 2018, following an organisational restructure, they hired a new CEO to lead the IMCC group. CEO Karl Roberts has seen the company through a rebranding exercise with all subsidiaries falling under one united brand: IMCC Investment L.L.C. as the group is known today.